Samsung have kindly sent me out one of their more modest android phones (when comparing to the great Galaxy SII that is), the Samsung Galaxy Pro. You might guess at who this phone is aimed towards from the name given to the phone, but if you need a slightly bigger hint just take a look at the device itself! 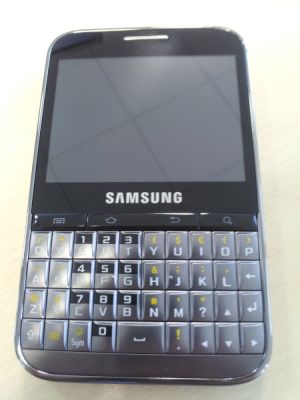 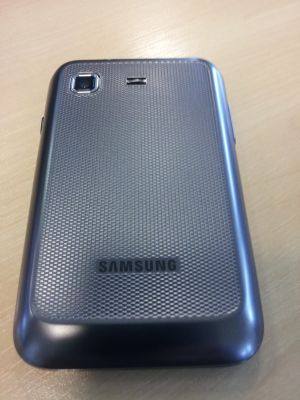 That's right, it does look very similar to those devices created by RIM. This is a budget smartphone offering from Samsung aimed at professional users who like to use a full QWERTY keyboard on the move (I suppose I should also include tweenies in that target audience too, but don't ask me why). Although the phone does somewhat take after a Blackberry in looks, Samsung have at least tried to retain some sort of product differentiation, and users of other phones in the Samsung Galaxy line will recognise a few design features that does help to keep the Pro part of the Galaxy family (even if not the favourite child).

The contents of the box include:

The top edge of the phone has the 3.5mm headphone jack and the microUSB data/charger port, similar to the Galaxy Ace but in reverse order. The right edge holds the power button, with the left edge containing the volume rocker. The back casing is textured plastic like so many of Samsung's latest android phones, and like the others it does add some character to the phone that a plain back wouldn't. I have the platinum silver version of the phone, and it does actually have an expensive and professional look about it.

I think to give this phone a review that does it justice, a comparison to a similar handset is required. Budget smartphones should not be compared to the likes of the SGSII, or dare I say it even the iPhone, if for nothing more than the massive price difference found between them. A more appropriate comparison would be to a similar prices Blackberry handset, lets say the.... Blackberry Curve 3G 9300, a Blackberry that is actually slightly more expensive than the Galaxy Pro (but hey, we gotta give RIM at least a chance on this one).

Lets start with the price, the Galaxy Pro is Â£40 cheaper than the 9300. For budget smartphones, price is one of the key factors a potential buyer is looking at, and Â£40 is a massive margin all things considered. Lets see if the specs of the BB make up for that price!

Looks wise, the Pro is more angular and possibly flatter looking. It is actually 3mm thinner so should slide in that suit jacket without causing an unsightly bulge (or those hipster jeans you tweens out there might be sporting). They are practically the same size apart from this, as well as weighing roughly the same, they are quite light handsets so you couldn't ask for much more than that. The 9300 has come media controls along the top of the phone that allow you to pause and navigate through music which I found quite useful.

The screen is one of the most important things on smartphones these days. It's all well and good having a great email client, but phones that are used to play games, to watch videos, to look at pictures require a screen that can display this multimedia to the best of its ability. The Galaxy Pro just about takes this one.

Both phones sport the same 320x240 resolution, although the 9300 has a slightly smaller screen size meaning some text is slightly sharper to the eye. However, as mentioned previously a larger screen definitely helps playing games, watching videos and especially browsing the web. The Galaxy Pro's 256k colours helps in this regard compared to the 65k colour display on the 9300. Both phones are able to play videos reasonably well. We tested both using YouTube, the Pro with the official YouTube app, and the 9300 using the mobile YouTube site. Both were smooth with no stutter, the bigger screen on the Pro helped with viewing hte video, but the 9300 did have a slightly sharper image.

The Galaxy Pro is running android 2.2 (froyo), while this isn't the latest version of android for phones, it is what most of the android phones out there are running, so it certainly isn't too far behind. Froyo works really well on the Pro, navigating through the phone is a smooth and painless experience the majority of the time. I hadn't experienced any slowdown using the phone, however it must be noted that I hadn't installed a lot of games and apps, so I would expect that experience to slow down as more are added. The Pro of course comes with all the benefits you have come to expect of android, the huge number of apps, fantastic google support and the freedom to make the phone unique to your own tastes. Samsung have even included live wallpaper support, which again works surprisingly well for a budget smartphone. 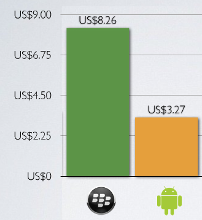 The number of apps available on android compared to Blackberry is much higher, and not only are there more apps, they are also Â much cheaper on average. The android market is growing at a fast pace while the Blackberry market isn't (although it is still growing). 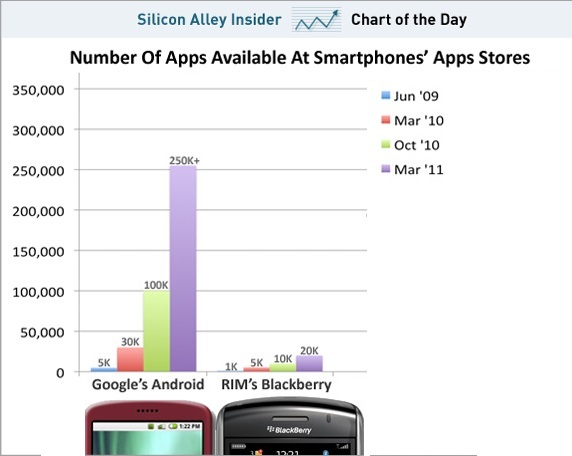 The 9300 runs the Blackberry OS 5.0. The Blackberry OS does what it does well enough, however at times using the phone does feel like you are simply scrolling though rows and rows of text. The lack of touchscreen support is a real let down on the 9300. The Galaxy Pro has a capacitive touchscreen, meaning you can either use the keyboard or the screen to interact with the phone. It's quite natural doing so, and using this side by side with the 9300 left me jabbing the screen multiple times hoping for it to respond to my touch (it never did btw). This is especially noticeable when doing things like trying to zoom in when looking at a picture. The pinch zoom on the pro is a joy to use when compared to using menu button on the 9300 to navigate to the zoom option! The Galaxy Pro has a 3.15MP camera compared to the 2MP camera on the 9300. The higher spec camera means the Pro can shoot pictures at 2048x1536, compared to the 9300 which has a maximum photo resolution of 1600x1200. Having said that, neither camera will win any awards for best photograph, although the Pro does benefit from autofocus which is missing from the RIM device. Neither phone has a flash so in low light conditions both are near useless. Something that did take us aback was just how good the battery life on the Pro is, especially when compared to the 9300. The official specs state the Pro has up to 11 hours of talk time, while the 9300 has only 4 and a half. And our usage did show the Pro lasting quite a lot longer than the 9300. This may be due to the larger battery in the Galaxy Pro, and we commend Samsung for including it. The Galaxy Pro comes with a measly 512mb of internal data space, well, measly as it may be it is still double that RIM provide on the 9300. However, both do have a microsd slot so you can expand this up to 32gb if you like (the Pro actually comes with a 2GB microsd card included too). We could go on and on, but I think it would be nice to end with a summary of the best features of each of these phones, together with our recommendation if you were to go ahead and purchase one now. Galaxy Pro Curve 9300
Conclusion
We have to give this one to the Galaxy Pro, it's an affordable device for people looking to get a smartphone, especially those that may prefer a physical keyboard whilst still retaining the benefit of a capacitive screen. And it plays Angry Birds as smoothly as you like, and at the end of the day, isn't that all we really care about...? Special thanks to Hanna Sookasian for assisting with the Blackberry information, and Samsung for providing the Galaxy Pro.