Rachid: The Samsung Galaxy Nexus is pretty much the phone to have right now. As a Nexus phone it's probably the only phone you can get your hands on right now that guarantees future updates to the next few iterations of android at least. Here at Droid-Den we've reviewed a few cases for the Galaxy Nexus, and today we're happy to have been able to test out an Otterbox case for the Galaxy Nexus. Take the jump to see our thoughts on the Otterbox Commuter case. Otterbox have seem to have gone for protection over beauty with this one! 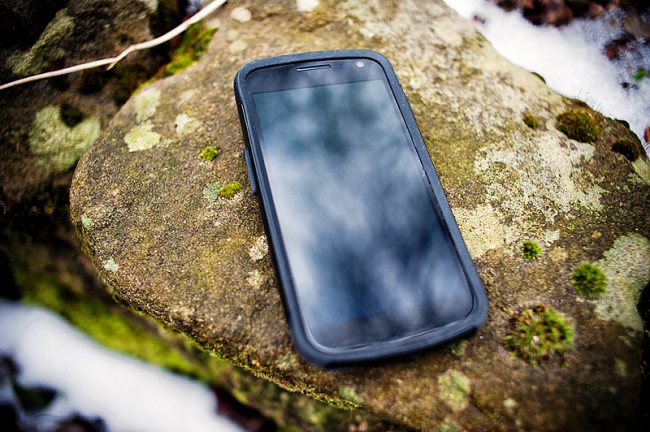 Installing the silicone layer is a doddle given its flexibility. I personally found it quite difficult to apply the outer
plastic layer as the silicone port flaps wouldn't go into place properly or the volume/power button wouldn't go into
place correctly. Obviously it's no brain teaser, it just took a few attempts to get everything aligned correctly.

The Otterbox Commuter is different to most of the cases on the market as it has two parts, a soft silicone rubber
layer and a high impact plastic layer. The silicone layer is supposed to help with absorbing shocks and the plastic
layer helps against bumps and protects against scratches. The durability and build quality of both layers is really
solid and is extremely well fitted to the phones curves and corners, with no issues in either layer covering any
cameras or microphones, however, it does cover the docking port with no move-able flap.

As the Galaxy Nexus has a textured back cover, the Commuter has a more smooth feel to it which does take
some getting used to especially if you have small hands. One downside to the silicone layer is that it will attract
any loose dirt or lint from your pockets and also gather it onto the screen. Not good.

With there being two layers to this case, it does add quite a big chunk of bulk to the phone. I weighed the phone
after applying the case, the outcome was an additional 39g* (174g* vs. 135g). I couldn't tell the difference in
weight when the phone was in my pocket but the additional bulge was definitely noticeable. The bulk also
detracts from the slickness of the phone, making it much less sleek and pretty.

Overall, the Commuter offers great all around protection of the phone. All ports are protected by the silicone
layer, of which, are able to be accessed easily by flaps in the material. The bottom flaps are extremely annoying.
I would have much preferred it if they opened the opposite way than they actually do as it makes inserting the
power cable/earphones much more difficult than it needs to be. The power button and volume rocker are also
covered by the silicone layer and are easily pressed. I'd have preferred if this wasn't the case as pressing the
buttons over material is a little strange when you've used the buttons au naturale. The plastic outer layer will feel
a little on the cheap side if you've used the phone without a case but knowing that you have that extra protection,
to me, outweighs this slight flaw.

As soon as the case was fitted, I instantly wanted to throw my phone on the floor. That's how solid this case
feels. It's a tank! Granted, you still have a 4.65" display which isn't protected in the same way the rest of the
device is. The case does however, come with a screen protector but it's not even worth applying. I've used high
quality screen protectors in the past and this isn't one. Avoid.

Having used the case for a decent amount of time, the bulk, for me, makes this case unusable for most
occasions. It makes the phone feel awkward to hold at times and with the increased amount of dirt it picks up, it
leaves the phone looking much less desirable than it actually is. That's not to say that the case isn't good for its
sole purpose which is to protect the phone as it does that very well indeed, I just feel that it could have been done
in a much slimmer manner.