Samsung have officially announced the US variants of their popular (and pretty damn sweet) Samsung Galaxy SII phones. It's taken a while, and I have been feeling sorry for my neighbours across the pond not being able to get their hands on what is in my opinion the best phone available at the moment. But now you guys have your chance. 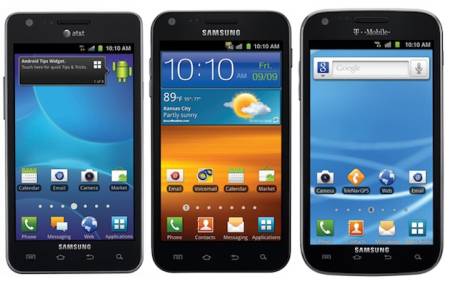 The phone will be released for Sprint on September 16 for $199.99, on AT&T on September 18th and T-Mobile sometime this Q3. In a change from normal procedure, only one of the phones will have a custom name, the Sprint device will be called the Galaxy SII Epic Touch (I feel lame just typing that name). Thankfully the others keep the original (and best) naming.

The devices differ slightly in curvature, with the AT&T model being the least curved (and my favourite looking), and the T-Mobile being the most curved (my least favourite looking..). The Sprint and T-mobile versions will also have a slightly larger screen at 4.5". Personally I think that's a great sized screen and my 4..3" screen is looking at them quite enviously.!

Check out the full press release below: