Fructel, an electronics company based in Sweden have recently released a new bluetooth controller to the market for android devices. The new product goes by the name of Gametel and is a bluetooth gamepad specifically designed for android phones and tablets. We managed to get our hands on one early and have been putting it through its paces with a few cool android games. Take the jump for a full lowdown on the Gametel gamepad and our thoughts on how great it is! 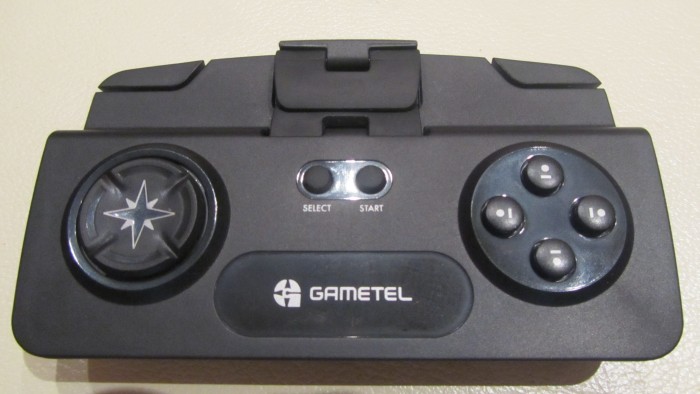 Fructal provide an android app to accompany the GameTel gamepad. The app is available for free from the android market and is used to both connect GameTel gamepads to your device as well as provide some basic gamepad settings. Pairing a new device to the GameTel gamepad is extremely simple. The application is very easy to use, and almost pairs itself to the device without you having to do much of anything! To pair a device (phone or tablet) to the gamepad you can follow the steps below: 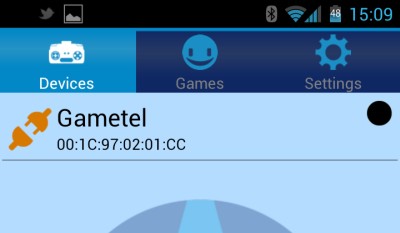 And that's all there is to it, you should now be able to test that the gamepadÂ has successfully paired by using the gamepadÂ to navigate around your android phone. The app also contains a Games tab which lists 50 games that are officially supported by the GameTel gamepad. The list of games also includes an appropriate link to the game in the android market which is a nice feature. Although I have to say, in my experience the gamepadÂ supports much more games than the 50 that are included in the official list.Â The final section of the app contains the settings. The list of settings isn't really extensive, but does include the following:

Ensures that using the gamepadÂ will not allow the screen to turn off.

Set which input method the device will default to when the GameTel gamepadÂ is disconnected. 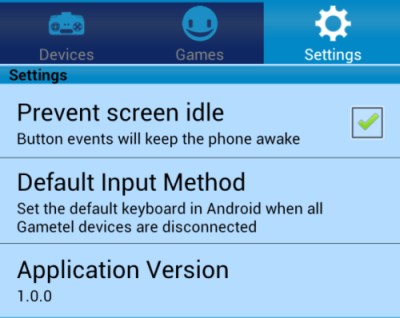 When the gamepad is low on battery, the app will display a new notification on the device informing you. However, there is no way to tell just how much battery is currently left. It would have been nice if there was an option to show the current battery percentage rather than just notifying when it's low. I've actually fed this back to the GameTel guys and they say it's something they may look at adding in a future update.

The app isÂ functionalÂ and does help to ensure that pairing gamepads to your device is as simple as possible, but I wish it looked a bit nicer to the eye. It doesn't really obey any android UI or functional rules. For example pressing the menu button does not open a menu. Pressing the back button wherever you are in the app closes the app, when it should take you back to the last screen. Thankfully, you probably won't be using the app after the initial pairing of your device so this isn't a huge issue.

You can grab the android Gametel app using the link below:

I was sent one of the first GameTel units off the production line, and as such the final packaging wasn't available so I can't comment on that. The contents of the packaging will include the gamepad itself as well as a user guide. 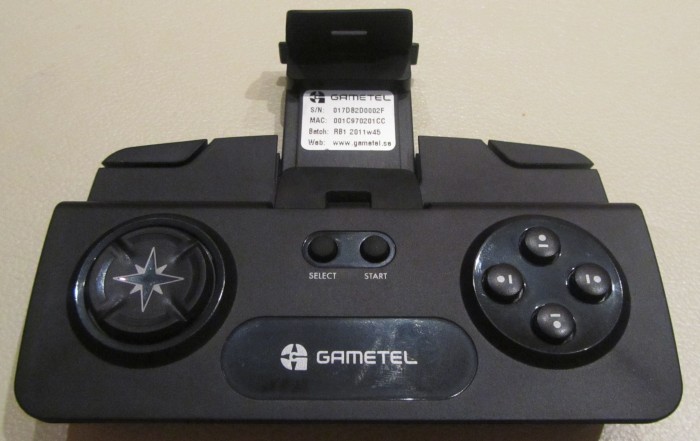 One thing I was disappointed in was the lack of a MicroUSBÂ charging cable. Fructal's answer to this was that you are expected to use the MicroUSBÂ cable supplied with your device to charge the device, but in my opinion this isn't always practical. For example, what if you wanted to charge both the gamepad and your device at the same time? MicroUSB cables are extremely cheap, and for the price of this device I would really expect one to be included. The gamepad itself is quite light at ~100g (just lighter than the SGSII) and measures in at 11.7cm (w) x 6.7cm (12.5cm when fully extended) (h). The plastic material helps keep the device light which is great, especially if you have a heavy phone, as you'll probably be holding both the gamepad and your phone at the same time. The gamepad contains the following buttons:

The shoulder buttons feel really good, if you've ever used an Xperia Play, then you'll wish Sony Ericsson had implemented their shoulder buttons just like this. The action buttons are fine, if I had one complaint I'd probably wish they were slightly larger, but that's me pushing for something to say, they do work fine.

The bottom end of the gamepad contains the MicroUSB port and two LEDs. To the left is the green LED that notifies you when the gamepad is ready to be paired while the red LED to the right lets you know that the gamepad is charging.

The gamepad contains an adjustable clamp towards the top of the unit where you can clamp your phone in place. This clamp sits nicely away when not in use, and extends to a height of just under 7cm, not quite large enough for the Samsung Galaxy Note, but more than enough for the Samsung Galaxy Nexus, the second largest phone I can think of! The clamp has rubberised ends that wrap slightly over the phone ensuring it stays in place and doesn't slip.

As mentioned earlier in the review, Fructal says that the Gametel gamepad officially supports 50 games. However I've tried it with many games thatÂ aren'tÂ on theÂ officiallyÂ supported list and it works great. 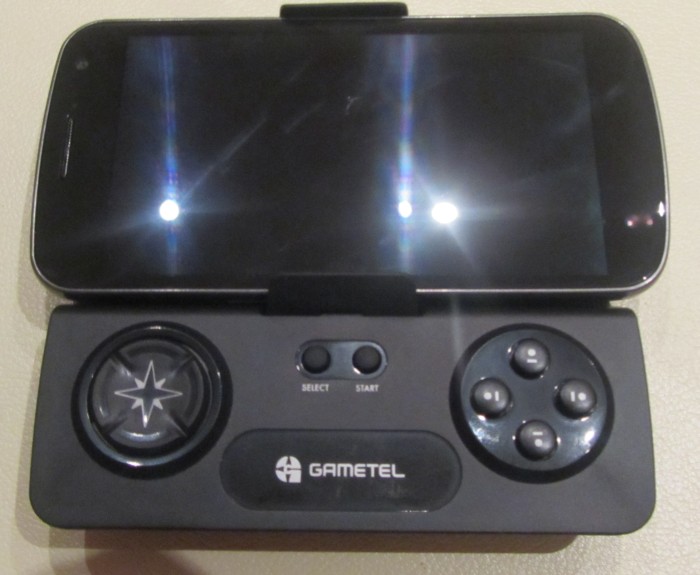 I find that using the gamepad that games are much more responsive that using on screen controls, and you get the added bonus of being able to see the whole screen as your fingers aren't in the way. I actually find that I'm much better at games when using the GameTel gamepad too. I've tested the device on phones as well as on the Samsung Galaxy Tab 10.1, and it works great on all screen sizes.

I'm very happy with the Gametel gamepad. It really does add much more to gaming on android. I find that I enjoy games a lot more due to the more accurate control I have. The number of games supported is also quite large. It seems to work with most games that have an on-screen dpad/action buttons which are the games you'll be primarily playing.

For the price I'd really expect aÂ MicroUSB cable to be supplied, nevertheless I would definitely recommend this accessory to any android owner that loves to play games on their mobile.

You can pick up the Gametel gamepad yourself from Amazon for RRP Â£49.99.
[nggallery id=22]