Polarbit's latest game Reckless Getaway has just landed on the Android market. I've been personally looking forward to this game for ages, especially after having hours of fun playing their similar game Reckless Getaway. The game is in the same style as their previous effort, so if you enjoyed that you should enjoy this version 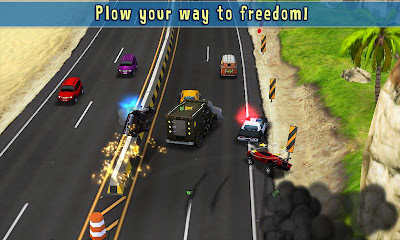 Apparently, the game is an Xperia Play exclusive for the time being, but I can still see it on the market on my SGSII. I'll attempt to download and update this post on my success (or lack of as it may well be).

Whoâ€™d a thought robbing the bank would be the easy part? Now comes the real challenge - to escape with your hard-earned loot and the fuzz hot at your heels! Weave in and out of oncoming traffic; dodge, outrun or ram pursuing police cars and just generally crash, smash and thrash your way through 16 varied levels. Letâ€™s face it: beating someone across the finishing line is a lot of fun, but not nearly as much fun as tackling them into oncoming traffic to watch chaos ensue The Developers behind Reckless Racing now brings you Reckless Getaway! FEATURES: - 16 eye-popping, visually amazing Tracks - Simple and effective controls - Unlock new tracks by earning your rates - Global leaderboards, show you're better than the rest - Astonishing physics brings chaos to another level ... and stay Tuned for: - New unlock-able Chapters - New unlock-able Game modes And a bunch of features we keep working on ... Optimized for Xperia Play