Instant Messaging - most of you reading this will have, at some point in time, used an instant messaging application. You will most likely already be aware that it is a bit of a flooded market with lots of companies still attempting to break into it.

To launch a successful IM app you need, in my estimation, 2 main elements 1) a good service and 2) people willing to use it, there is nothing more lonely than sitting on your own with an IM application open (....well, I am guessing... :D ) waiting for friends to talk too.

Samsung entered this market some months ago, with their app, ChatOn. Â This app has just had its first major facelift to bring it in line with the release of the Samsung Galaxy S III where it now ships as a stock program. 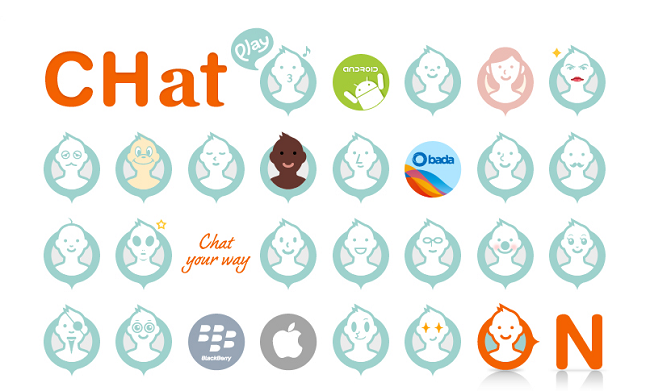 For the purposes of the rest of this article any comparisons will be drawn against BBM (Blackberry Messenger) unless otherwise indicated, this is purely because it is the closestÂ appÂ (that comes as stock in certain devices) to the service that Samsung are offering.

There are not many multi-platform apps that work like this one, as I stated above BBM is the closest I know of in terms of functionality, however BBM is Blackberry only, thisÂ obviouslyÂ limits itsÂ user-base. Â The app uses a 'push' system to send messages through to your device and includes a â€˜readâ€™ indicator so you know when your message has been read. Â There is no â€œonline" or "offlineâ€ status, it doesnâ€™t matter, messages will be delivered next time the recipient has a data connection.

ChatOn is available (free of charge) for Android, iOS, Blackberry, Bada and Windows Phone 7, so it shouldnâ€™t matter that your friends are using other devices, you can all chat together with ChatOn.

ChatOn is a very smart looking application (in my opinion), the redesign has been done to put it in-line with the UI of the s3, however it looks nice on any phone, certainly more modern and slick compared with the original ChatOn app: 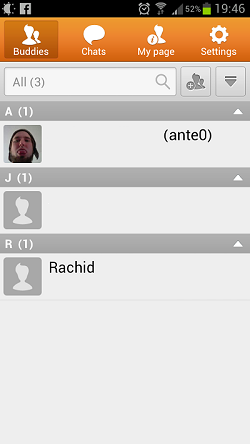 If its your thing, you can have a nice little pop up (similar to Handcent or other SMS apps) when a message is received, where you can directly reply if you so wish: 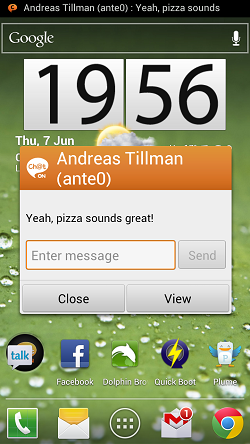 The chat window is designed as you would expect from an IM app: 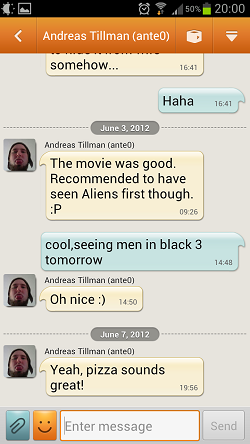 You have a variety of options in how you could communicate e.g. animated message (you can draw something, no not the game!), photographs, videos, sound etc: 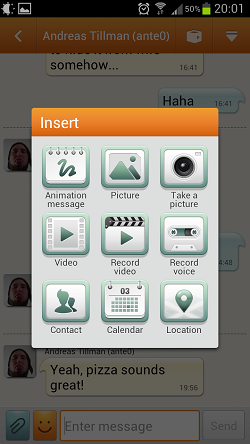 You also have the option to broadcast messages to everyone, or a set group... if that is your 'thang'

Now no review is complete without a look at the negatives, and yes, everything has a negative!

I can think of two pretty major problems which are both linked to the same issue:

1) Registration is done via a mobile phone number, which means, should you need to change phone number (as I recently discovered when I moved to the GiffGaff network) you have to start over again, with no friends in your list. Â Samsung have gone some way to address this by allowing us to use Samsung IDâ€™s but this still does not completely remove the problem. Â You face similar problems with other apps including BBM but Samsung had the opportunity to do something about it here and have chosen (so far) not to.

2) You need to know someones phone number to add them as a friend. Â Now I am not sure how the rest of you use IM apps but I tend to include people on there thatÂ I would not normally wish to phone or SMS so I donâ€™t feel entirely comfortable giving them my mobile number, again Samsung have started to address this issue with the use of the Samsung ID (but this assumes you own a Samsung phone).

The only other issue I have is: not enough people use it!

This is largely because a lot of people do not seem to know it exists, or automatically class it as â€œbloatâ€ and therefore ignore it (as it is pre-installed on certain phones). Â However I believe that it is a very good app and I urge everyone to at least use it before deciding that it's not for you. Â If this does not improve then this application is doomed to fail and will be wasted on people who cannot put it to use simply because they have no one to talk to.