Hello my name is Richard aka DroidExaminer. Here at Droid-Den on every Friday, I will give you a review on a couple of Google Play gems that I feel are worthy of a download. Here are this weekâ€™s must downloads.

I have noticed this game just sitting in Google Play's "Top Paid Downloads" for quite some time. I decided this week after seeing a few reviews and checking out the YouTube video to give it a shot...(no pun intended). I will have to say that this is by far a very addictive game when you have a lot of time to spare. This game took me back to the years when I was in my own backyard, trying to make difficult and impossible basket shots. I am sure you all have seen the many YouTube videos also of trick shots that although may be questionable, some are very much real and take a lot of skill to perfect.

So basically you have three shot to make a perfect basketball shot in the net as well as rack up as many points as possible. The highest score in each level gives you 3 stars. You aim and power how far your shot is by touching the touch screen. Now you cannot just aim to get the ball in the net. That basically gave me the lowest amount of points. The idea is "trick shots". How about bouncing the ball off a chimney, than on the roof, then off a gutter, then bouncing right back up to land right in the basket. I am not even exaggerating or touching the surface of crazy shots. One level had balloons flying by and as I popped them, my score was multiplying. It is a fun game with ton of action appeal. Download it!....But pay for it. It's worth it.
[youtube http://www.youtube.com/watch?v=bQVoygcU1rk]

"GLORY, HONOR and FAME are yours for the taking!". Oh yes it is. I was wondering when i would ever see a jOusting like game that had awesome graphics and gameplay. Shake Spears is this game I was longing for. You have 20 cities with jousting opponents, in 4 worlds, and with 4 bosses. The game has excellent graphics and catchy music. You can upgrade your armour and shields and well as your "lance" (that stick you charge with) with gems you collect for won battles.

Gameplay is rather simple. The battle starts and both the player and opponent charge automatically towards one another. You must then slide up and down using both sides of the screen to control your characters actions. The left side is for your shield and the second is for your Lance. The action slows down and zooms in as you both reach theÂ point of impact. Now the only way to knock your opponent off theÂ horse is to deplete his life bar. You must aim for areas that are not shielded. If no player or opponent has been knocked down the charge starts again. (make sure you remember that you always restart on the left side. It restarts fast and that is a flaw in my opinion but minor). All in all it is a fun game with a lot of customizationÂ and also fun. Download it.
[youtube http://www.youtube.com/watch?v=6KmNIJj6c8o] [app]com.alawar.ShakeSpears[/app]

Ok i had to do it. The Avengers is out today in theatres in the USA. I am a big Marvel fan. I have watched and enjoyed every single Marvel movie (except the first Hulk movie) and tonight along with millions I am sure will watch it as well. Now in the market this interactive comic book is no joke. It has so much appeal and its saddens me that others were not released for each Avenger. I would have loved to see a prequel like comic for Steve Rogers aka Captain America. Even Bruce Banner in hiding trying to cope with his Hulk alter ego. I mean Tony Stark (Iron Man) has two movies under his belt or ummm Armour.

This is app is a comic like pop-up book for grown ups. You can interact with different aspects of the comic books graphic on the screen. Wanna put on Tony's armour for him? You can. Wanna his suit and see a charge blast you will. It's a comic book that is digital with extras. You can even find Avenger Tokens to unlock pencil sketch art.

ANyways this is cool treat to give a read before you go and see the movie . I don't want to give away anything but it plays a small role in the movie. So give it a read. Download it. 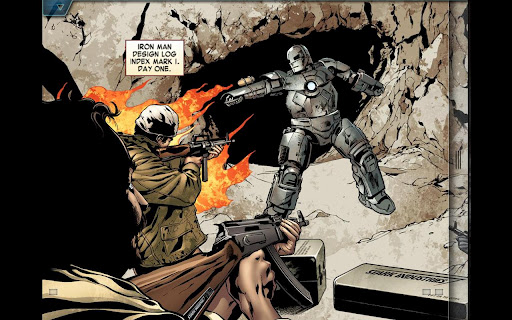